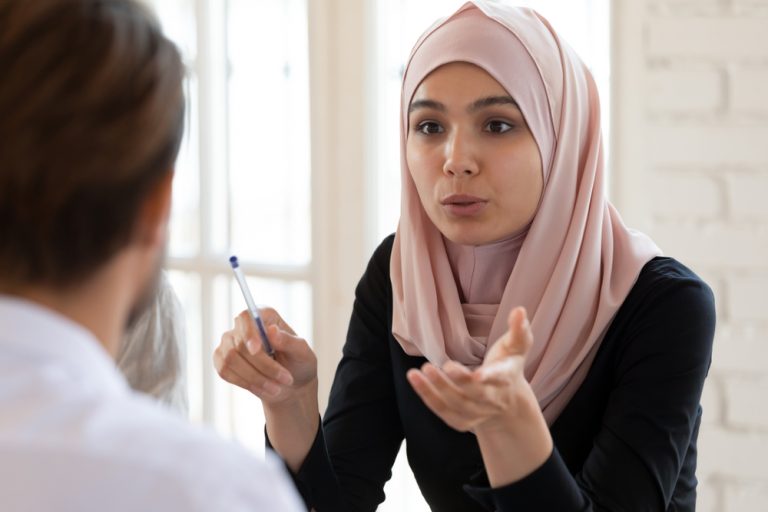 Different religions have been in existence for centuries, but truthfully, some people used to not be as accepting of faiths other than their own. Fortunately, today, more and more people are acknowledging these religions. This positive development in accepting others’ choices to practice or not practice a belief is always welcome and appreciated. However, unfortunate cases of religious discrimination persist.

Religious discrimination, whether intentional or unintentional, happens in everyday life—for instance, being refused service in a restaurant or an opportunity for a job interview because of one’s religion.

Beliefs and religious practices do not affect a person’s ability to accomplish tasks and execute work-related activities up to standards. Find out more about religious discrimination in the workplace and the available protections available to address the issue.

What is religious discrimination?

Religious discrimination can come in many forms. In the workplace, it pertains to how employers, co-workers, clients, or customers treat employees differently—unfairly and unequally—because of their beliefs or religious practices, or lack thereof. This covers amendments in a workplace rule or policy due to one’s religious beliefs and practices. This unreasonable behavior is against the law.

As an employee, you should study and understand your legal rights, including which civil rights laws are being broken. There are rules and regulations in place to protect you from an unacceptable treatment like this in the workplace.

Title VII of the Civil Rights Act of 1964 defines religion as a term that covers “all aspects of religious observance and practice, as well as belief.” This governs all Christian denominations and other faiths such as Islam, Judaism, Buddhism, Hinduism, and more. Regardless of the religion of an employee, it’s unlawful for employers to violate their rights in expressing their held beliefs in the workplace.

The U.S. Congress passed the Religious Freedom Restoration Act (RFRA) in 1993, which prohibits federal agencies, departments, of any State, from passing a law that bounds a person from expressing their religious freedom unless the “application of the burden” is for the advancement of governmental interest.

Many U.S. Muslims shared that they have experienced a form of discrimination even outside the workplace. A different study shows that Islamophobia is growing in America, with hate mails, anti-Muslim graffiti, and death threats over the phone being reported in the Chicago area.

In some parts of the world, there are laws or policies that prohibit women from wearing hijabs in the workplace, such as in the public sector, like nurses and front-line military workers.

This anxiety or fear is common among individuals that conceal their beliefs (or non-beliefs) in the workplace since it is believed that they are less likely to receive harassment or bullying that way.

This shows that Muslim men and women are not given equal opportunity or are being held back in the workplace because of Islamophobia. Moreover, the research revealed that minority ethnic-sounding names have fewer chances of being offered an interview, and young Muslims routinely fear being targets of harassment and expected to work “10 times as hard” as their white counterparts.

The imposition of beliefs is a form of harassment where organizational leaders mandate participation in religious practices regardless of one’s faith—in particular, requiring or urging employees to attend services or prayers of a specific religion.

Forms of Religious Discrimination in the Workplace

For these discriminatory behaviors to be identified and called out, you must know its different forms first.

1. Unjust dismissal of an employee due to religion

This is a form of direct religious discrimination—treating an employee unequally or less favorably than others because of his/her religious background. The Civil Rights Act of 1964 prohibits employers or agencies from firing employees because they need to take a day off to observe a religious event.

2. Hinder promotion based on religious practices

Suppose your employer refuses to promote you because they see your daily prayers as something that prevents you from working efficiently. In that case, it’s a form of discrimination as it creates a hostile work environment. This means that they make employment decisions that completely disregard one’s work performance and capabilities.

3. Lower compensation because of religion

An example of this is receiving pay that is significantly less than a white employee with the same experience and title. This also includes not receiving the same benefits as other employees for no other reasons than beliefs and religious practices.

Bullying an employee or committing a hate crime against someone at work because of religion is direct discrimination, or can also be considered as harassment. This may be verbal (e.g., offensive comments, use of information to stir up hatred, or being called names because of dress code) or physical (e.g., religiously motivated attacks that physically hurts an individual).

When employers put forth policies that apply to everyone but disregard the employees’ religious beliefs and practices, they indirectly discriminate against those employees since it gives them a disadvantage. An example of this would be banning wearing specific religious clothing or items, such as the hijab worn by Muslim women or symbolic bracelet for Sikh men.

This is also an example of indirect religious discrimination. Setting work schedules that are unfair for some employees or hinders them from taking some time for religious observance unintentionally excludes them because of their faiths.

How to Address Religious Discrimination at Work

If some acts of discrimination in the workplace have been done to you or someone else, you can take these necessary steps to address the situation appropriately.

If and when you experience direct or indirect discrimination because of your faith, call the person’s attention. Educate them about your civil rights and let them know that the issue at hand is not to be taken lightly. Do not let it slide. Otherwise, such behavior will continue.

2. Speak to the person’s manager

Raise the unruly behavior, hostile actions, or verbal attacks to the offending party’s supervisor. Set up a meeting with their immediate manager to promptly address the issue and put an end to their objectionable behavior.

You can file a complaint against the person to let them and everyone in the organization know that religious discrimination is a serious problem to eradicate. When employees know that there’s a clear complaint process against such harassment, they are less likely to do any discriminatory behavior against others.

4. Have a legal assistance

You can employ the help of an attorney for assistance to help fight for your civil rights and make the harasser pay for the undue hardship and emotional or physical toll that their discriminatory actions have caused you.

Religious Discrimination is a Serious Offense

Companies are responsible for setting rules and policies that are inclusive to all people from all walks of life or faith. Remember that there’s a constitution in place that protects you in the workplace, including laws that allow you to express your beliefs and religious expression freely.

If you’ve been a victim of religiously motivated discrimination, don’t hesitate to fight for your rights in the workplace. For legal assistance concerning religious discrimination, get in touch with Shegerian Law. We have a team of legal professionals that can help you exercise your freedom in expressing your beliefs.